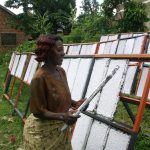 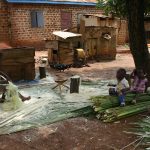 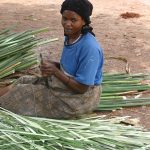 In Uganda, and in much of the developing world, when school-aged girls hit puberty, they are often forced to miss school during menstruation due to the inaccessibility of affordable sanitation products.

Fifteen years ago Moses Musaazi, an engineering lecturer from Makerere University in Kampala, Uganda, was asked by social researchers from the university, working in conjunction with the Rockefeller Foundation, to address this challenge by developing a low-cost sanitary pad, made from local materials, to give girls access to affordable hygiene so they would no longer have to miss school.

Musaazi’s invention, the MakaPad, is a sanitary pad made from waste paper combined with sustainably harvested papyrus that grows abundantly in the vast swamps around the fringes of Kampala. These swamps are vital ecosystems for air and water purification for one of Africa’s fastest-growing and most congested cities.

In developing the Makapad, Musaazi, profiled here, and his small team of action-researchers have also developed an ingenious, decentralised fabrication process, which essentially reworks the idea of the factory to better suit Africa’s context of rapid urbanisation, widespread unemployment and strained infrastructure.

Sub-Saharan Africa is the region with the world’s highest rates of urbanisation and population growth. Half the African population is currently below the age of 20. Two-thirds of urban Africans live in informal settlements. By 2050, the current wave of urbanisation is expected to bring a further 1.3 billion inhabitants into cities that are already strained far beyond their capacities. All of this points to an urgent need for reconfiguring the ways economies are organised and resources are distributed – and the Makapads story points to many small potential shifts towards meeting Africa’s urban challenges sustainably.

The Makapads’ production method is labour-intensive and decentralised, harnessing the natural flows of people and goods moving across a sprawling, informal, electricity-scarce urban landscape, while also providing employment to refugees and other vulnerable people, particularly women. Much of the initial processing takes place in women’s homes. Everything is done by hand, using purpose-built hand-powered machinery, and the final product is sterilised using solar power.

The use of local resources, local labour and off-grid power results in a pad that is chemical-free, biodegradable, and sells for less than half the cost of imported products on supermarket shelves. In 2013 MakaPads won second place in the Siemens Siftung Empowering People awards because of its innovative model and social impact. Some 600,000 packets of sanitary pads are produced each year and sold mainly to NGOs and the United Nations’ High Commission for Refugees (UNHCR).

According to Musaazi, the potential market for Makapads is huge across Africa and beyond. UNHCR, one of the Makapads’ largest clients, has recently invited the company to establish a factory to employ refugee women in making pads to supply female refugees in neighbouring Democratic Republic of Congo. A pilot plant for producing the Makapads will also soon be established in Sierra Leone, which Musaazi hopes will serve as a base for expansion into West Africa. In a broader sense, the success of Makapads also points to ways in which innovation, experimentation and interdisciplinary collaboration can be harnessed to address basic human needs.

Through his company Technology for Tomorrow, Musaazi has gone on to develop a suite of innovations to address related issues of sanitation, access to clean water, sustainable building, and water capture and storage. In schools, refugee camps and other settings, for example, the pads can be disposed of in fuel-less, emission-less incinerators also designed by Musaazi, that are installed next to toilets and at the same time heat water for hand washing.

And then there is the issue of women’s empowerment, also understood as a crucial factor in sustainable development. All along the Makapads’ production chain, the project addresses issues of women’s employment, education and healthcare. In Kampala, a number of women with child-rearing responsibilities are able to work from home, instead of having to endure long, exhausting commutes through a gridlocked city. Local materials, harvested from nearby swamps, are delivered to their doors.

Women enlist their neighbors in the work of pounding and sun-drying the papyrus stalks into fibrous pulp. Work becomes a social activity, as small groups of women sit together in their compounds working the fibers, while their children play at their feet. Such flexible employment provides economic security for the women, who are then able to give their children better nutrition, education and healthcare.

The use of papyrus as an abundant local natural resource also serves to connect a rapidly expanding and urbanising community to its natural surroundings, and to the ecosystems that purify the air and cleanse the water upon which the health of the community depends.