Can ancient unique ecosystems be protected in an age of global movement of plants and animals?

Predator Free New Zealand 2050 is a plan being implemented by the New Zealand government to eliminate all invasive vertebrate predators, including rats, brushtail possums, and stoats, to protect New Zealand’s rare endemic species.  The government plan arises from a broader set of social and scientific initiatives.  The plan aims to dramatically reduce NZ’s populations of introduced predators, including rats, stoats, possums, weasels and ferrets by 2050.  These predators threaten New Zealand’s unique native species.  New Zealand has the highest rate of threatened species in the world.  About 80%, an incredibly high proportion, of New Zealand’s birds, reptiles and freshwater fish are endangered.  Due to New Zealand’s geographic isolation and relatively recent occupation by people, New Zealand has an unique bird dominated fauna, that includes plants and animals that are not found anywhere else in the world.

While the arrival of new plants, animals, and diseases is a problem world-wide, it is a particularly intense problem in New Zealand.  Pre-human New Zealand was full of ecosystems dominated by small lizards and flightless birds.  However, since the first land mammals arrived with people, about 750 years ago, many species have gone extinct and had their populations greatly reduced.  These losses greatly accelerated following European colonization.  Today, the New Zealand government estimates that invasive predators cost the country over 3 Billion NZ dollars (about 2 billion Euros) a year due to damage to agriculture, but people also worry that invasives are eroding NZ’s tourism industry and its cultural identity.

The goals of Predator Free NZ are unprecedented in global conservation.  Globally, invasive species have been eliminated from over a thousand islands, however the largest island ever cleared of invasive species is more than a thousand times smaller than New Zealand.  Furthermore, most of these islands have not been occupied by people, while New Zealand’s human dominated ecosystems, agricultural fields, towns, and cities as well as its trade with the outside world complicates attempts to eradicate invasive species.  However, in the past decade invasive species control has become more socially, ecologically, and behaviourally sophisticated and has had successes in eradicating invasive species from large human occupied islands.

New Zealand has developed and applied strategies to eliminate invasive mammalian predators on offshore islands and in fenced parks, but large scale predator control faces many ecological and social challenges.  Elimination of predators can produce ecological surprises.  It can lead to increases in the population of other pest species and selective predator control and reintroductions of locally extinct species can produce novel ecosystems that behave in surprising ways.  Socially, eradicating predators presents many challenges, in that it requires not just a majority but almost all people to at least tolerate predator removal.  Given that New Zealand residents relate to nature and animals in different ways, and there are substantial disagreements on how people should relate to nature between New Zealand government and Maori governments, reaching such agreement will be challenging. However, there is broad support in New Zealand for predator control.  There are thousands of volunteer community groups that spend their free time setting and checking wildlife traps.

In a 2015 article in Bioscience, New Zealand Invasive Species Ecologist James Russell and colleagues proposed a plan for achieving that vision:

A 50-year time frame has emerged for the aspirational goal of PFNZ, coinciding with the increased scale of island eradications. The first step would be to set national targets for the percentage area that is pest-free, benchmarked against international standards (e.g., 10% pest-free offshore island estate). Eradication of invasive predators from the two largest offshore islands: Rakiura/Stewart Island (174,600 ha) and Aotea/Great Barrier Island (27,761 ha) has therefore been proposed as an interim 10-year target. This would increase New Zealand’s invasive-mammal-free offshore island area to over 50%. Eradication of invasive predators and maintenance of predator-free status on these two large islands inhabited by humans would demonstrate proof of concept for scaling to the New Zealand mainland. Simultaneously, mammal-free peninsulas have been advocated as a stepping stone to achieving local eradications. Following this, more large (i.e., larger than 100,000 ha) ecosanctuary reserves are proposed, providing connectivity of halos across landscapes. This would require defining an accredited minimum standard in pest control that achieves biodiversity outcomes. 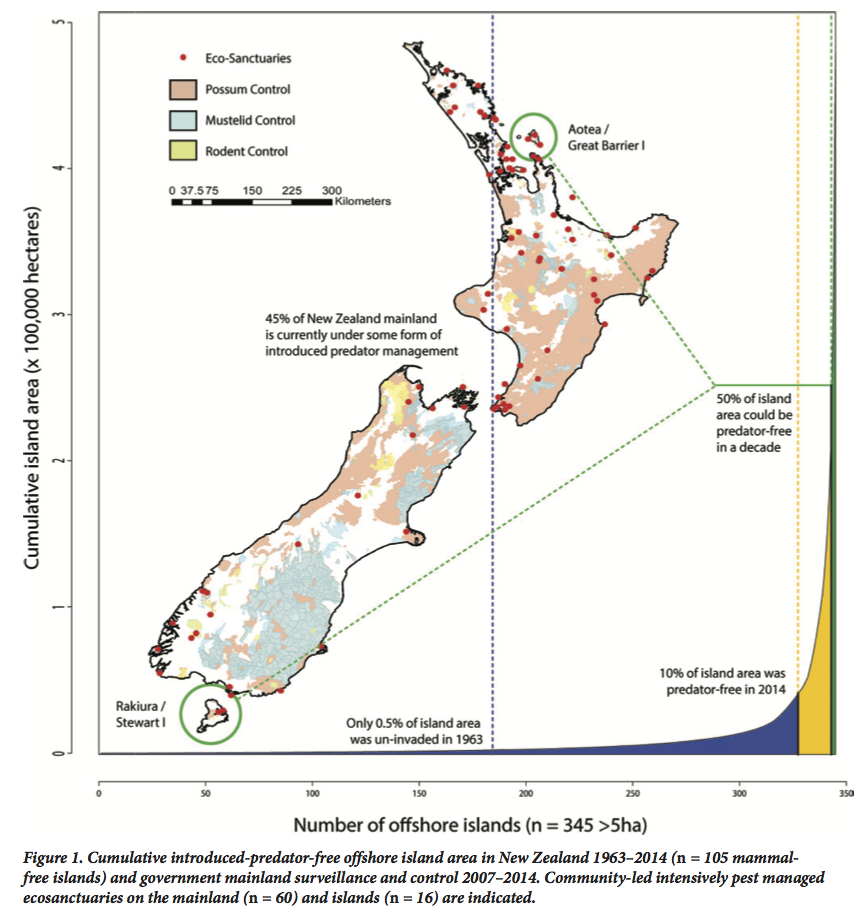 Following that paper the government announced a Predator Free New Zealand policy.   New Zealand scientists are working to develop new predator control technologies ranging from new types of traps to new targeted species-specific poisons. There are also plans to explore the possibility of using ‘gene-drive’ technologies to interfere with introduced species reproduction. Along with predator control, this project requires developing new monitoring techniques for tracking small numbers of predators over large areas, as well as the ability to monitor and forecast the consequences of predator removal on ecosystems. However, while the scientific challenges are substantial the social and political challenges are perhaps more substantial. Killing and monitoring animals over a large area requires substantial public consensus and political support. In New Zealand, this requires connecting government plans with Māori goals for environmental management and restoration, as well as people living and working in agricultural and urban areas. Such support requires developing and articulating a new vision for New Zealand nature.

Factors potentially limiting the ability of Predator Free New Zealand achieving its goals include lack of funding, political conflict, conflict over animal rights and cultural landscapes. The project is likely to be enabled by technological or scientific innovations that lower its costs, shifts in social norms that strongly value native New Zealand birds and plants, and if agriculture shifts to enable restoration of more native habitat.

This seed could be globally relevant, because the negative impacts of invasive species are a substantial, difficult to control problem. Success in New Zealand could trigger new initiatives in other islands with many endemic species.  In New Zealand the plan is for this seed to grow from isolated islands to larger islands and eventually the New Zealand mainland. In New Zealand, it has the potential for people to start to reappraise their relationship with nature, and New Zealand’s endemic plants and animals.