How can people working in the centre of mega-cities by reconnected to agro-ecosystems?

The Urban Farm at Pasona Tokyo Headquarters is a nine story, 21,500 square metre corporate office building near Tokyo station in central, downtown Tokyo.  To get an idea of the context you can view the building in google street view.  What is unusual about the building is that highly intensive urban farming facilities makes up about 20% of the building’s space.  The building was designed by the Japanese architecture firm Kono Designs and opened in 2010.

The goal of the building was to provide a beautiful work environment that promotes worker’s productivity, mental health, and social interaction and engages the wider community of Tokyo by highlighting urban agriculture.   The building was designed to be an experiment.   Given the extremely high cost of real estate in downtown Tokyo this was a major investment by the building owners. The large Japanese staffing multi-national Pasona initially planned to create agricultural jobs, but after operating the building its has developed a spin-off urban urban agriculture company.

Crops and office workers are connected. Farming and office functions share space. Rice, fruits, and vegetables are harvested, prepared and served within the building. Making the Pasona cafeterias within the building, making the cafeteria a large farm-to-table (https://en.wikipedia.org/wiki/Farm-to-table) restaurant. Office staff are involved in caring for the plants in combination with a team of urban agricultural specialists. The goal of this was to encourage social interaction and build teams as well as employees with a sense of responsibility and accomplishment in growing and maintaining the crops that they and their colleagues eat in the cafeteria.

Plants are used as decoration and dividers within the building.  The main lobby includes a rice paddy and a café, highlighting the building’s urban agriculture to visitors.  Flowers and fruit are planted on the balconies in the buildings, especially in the building’s double skinned façade (https://en.wikipedia.org/wiki/Double-skin_facade), in which an outer and inner skin of the building allows air flow between them to mix air around the building that provides natural air flow while being energy efficient. These plants vary with seasons and make the building’s external façade dynamic and colourful. 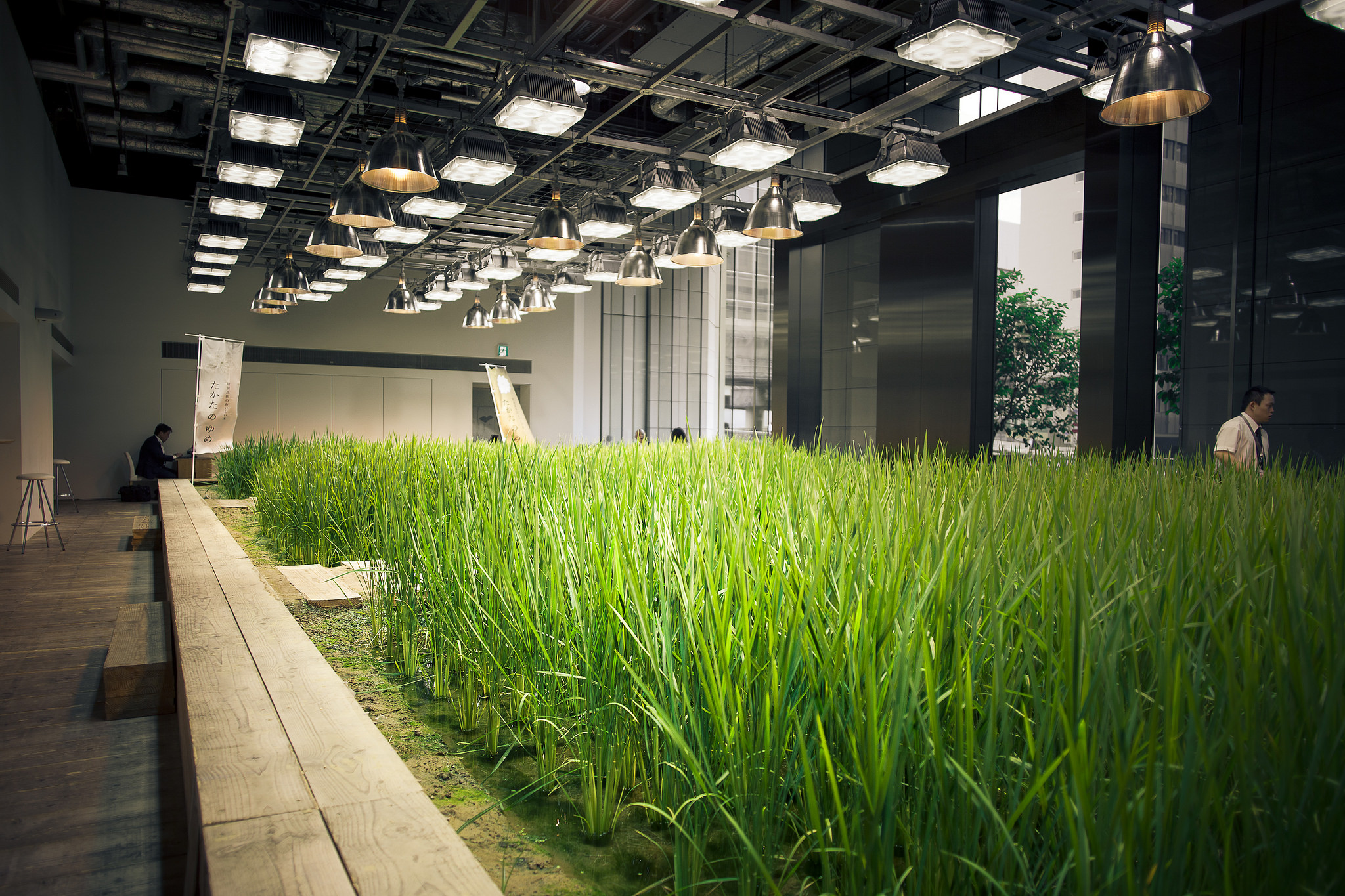 The urban farming within the building is highly intensive in terms of technology, energy and labour. Many of the farming areas are underground, illuminated by lights, irrigated by control systems, and use both hydroponic and soil based farming. An automated climate control system adjust humidity, temperature, and air movement to balance the comfort of office workers and crop growing conducts, and varies the balance between the two to take advantage of nights and weekends when office staff are not present.

Pasona also has established programmes to develop new farmers by offering public seminars, lectures and internship programs. The programs trains students in both traditional and urban farming. In two years, the program recruited 150 and 200 students respectively, aiming to reverse the declining trend in the number of farmers and to ensure sustainable future food production.

The building has had some problems balancing its multiple goals and these are discussed in this article by Jared Braiterman. He identifies several weaknesses of the project:

This seed could be replicated in other cities, and it explicitly aims to change people’s values but the extent it has been able to do that has not been evaluated.